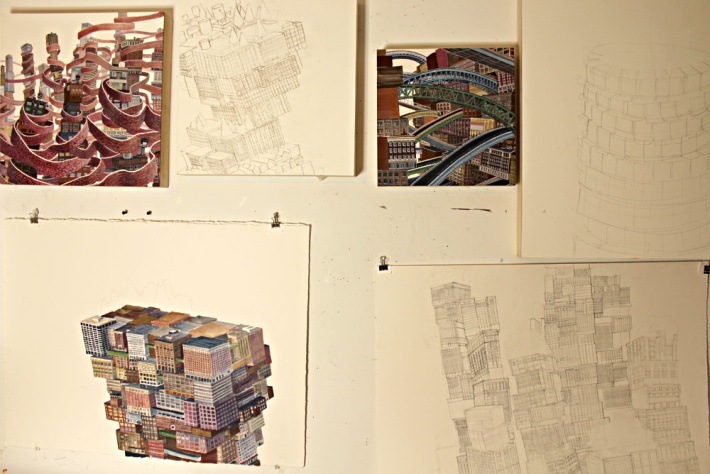 Okay, I did make some progress since last week, although it’s not the sort of dramatic progress that people shriek at on reality tv- such as “oh my god, you demolished my house and replaced it with a giant igloo! wow!!!” It’s more skeleton progress, things to build on. Not that you should build on skeletons. Didn’t any of you guys see Poltergeist? I guess I am thinking more of an underlying structure.

This week I have been working on getting a few different paintings going, and most of my progress has been made on the small panels and paper pieces on wall 1. I did some underdrawings and began blocking in one piece on paper. The little bridge panel is giving me pains in the butt because I am revisiting a panel I gave up on a year ago and reworking it. I always think,” hey this will finish fast because it’s already started and underway!” But it’s like trying to squish your foot in a weirdly shaped shoe when you are working around old thoughts on a piece. Things never quite fit like you thought they would. And there’s a lot of unpleasant chafing. oh well.

wall 2, the only progress is that I rough sketched another small panel.

(and moved my lobster anomalies.)

Wall three is looking all lonely and neglected this week. It looks exactly the same as last week, except that I think my tacked up paper rolls unraveled about a half an inch. Just think, at that rate the paper will flatten itself in 1.86 years. I did get the crate for the commission and so next week this wall will look different either which way any other progress goes.

Don’t wake up Wanda! Hopefully next week I will have a studio chock full of more progress to report. Until then!